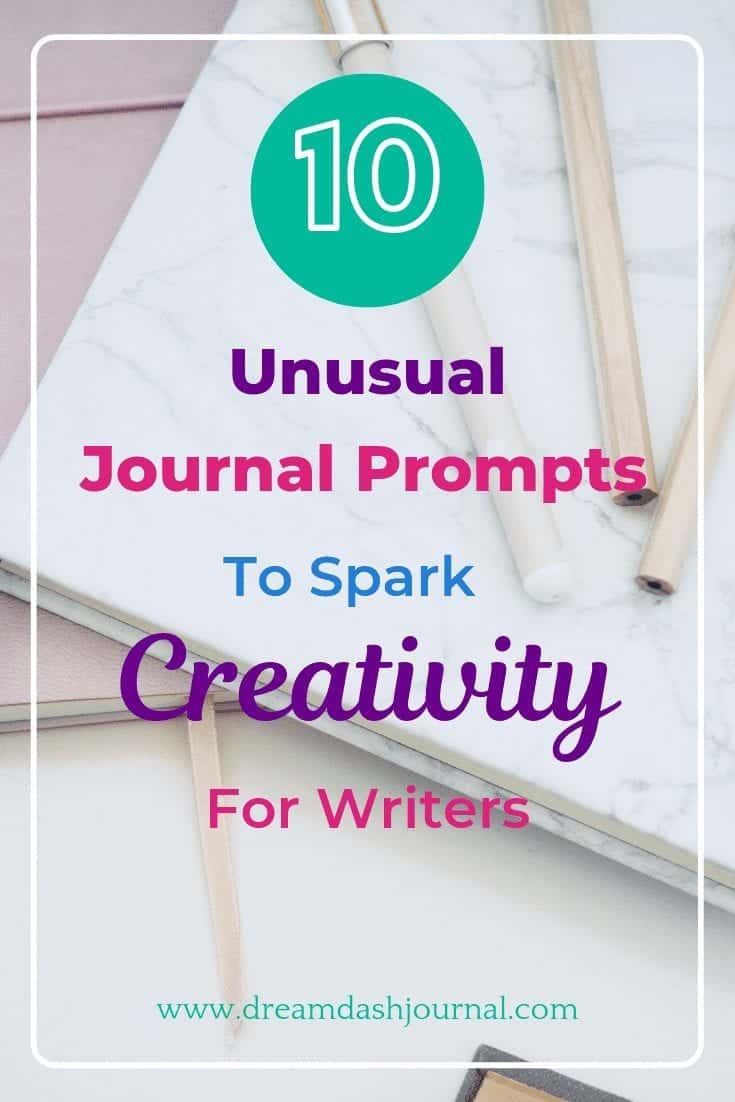 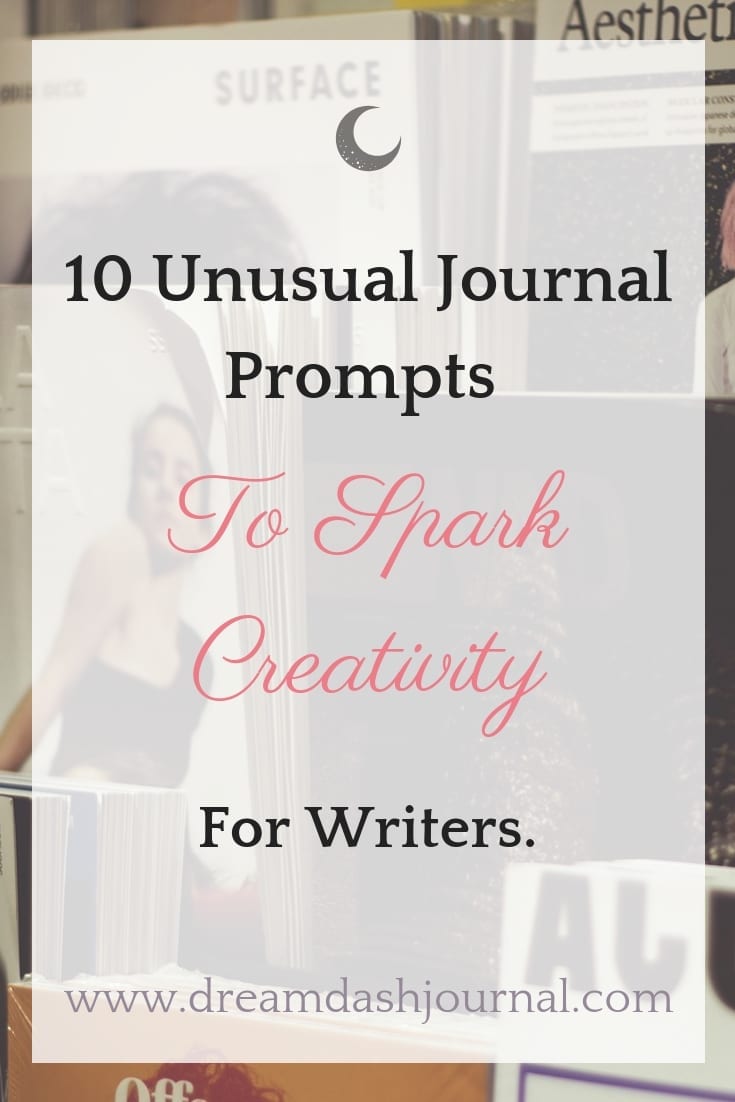 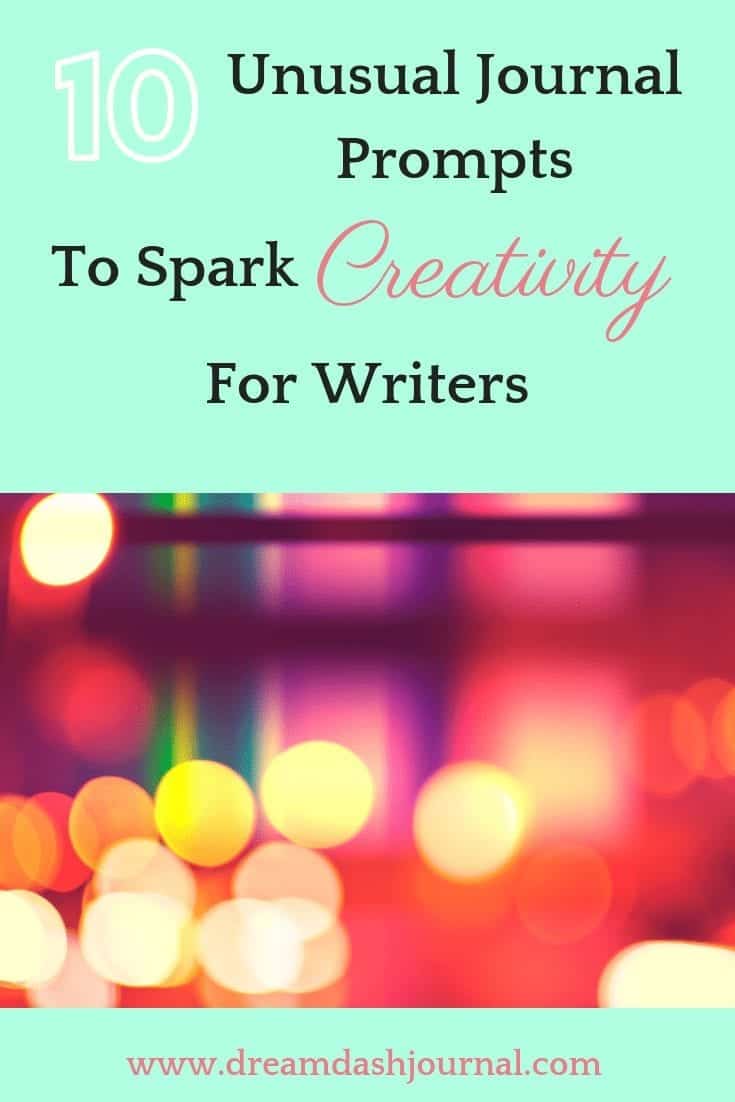 **This post contains affiliate links, meaning I may receive a small commission at no additional cost to you for products you purchase via this website. For more information click here.**

Do you need a bit of juice to get going with your writing?

Whether you write fiction, short stories, or whatever, sometimes you get stuck creatively and need access to something to feed your inspiration. Well guess what? I’ve got you covered with some unusual journal prompts to spark creativity!

I hope these prompts twist you out of your own headspace into a warp zone of weirdness and possibly make you LOL.

This could be a potentially controversial thing to say, but some things are non- negotiable. Like infinity. I’d love to hear someone’s argument against infinity and why it does not exist. How the universe is not infinite. I think this would be impossible to argue against and anyone who tried it would just look silly.

Also, the 80’s metal band Iron Maiden. No one can argue against Iron Maiden

2. 10 Articles of men’s clothing or men’s fashion you cannot stand or which gives you pause.

My BFF and I were having this discussion the other day- What do men wear that you personally dislike? That turns you off or makes you shake your head?

For her, it’s light wash jeans. For me, it’s coral shorts. And for some reason, as much as I don’t want to like man-buns, I find them strangely attractive. It’s an involuntary hormonal response, I can assure you.

3. 10 Things that make you seriously wonder if this life is a computer simulation.

Example: The Mandela Effect. I definitely remember the BerenstEin Bears, not BerenstAin Bears.

Also, the fact that humans, as crazy as we are, can all agree on what year it is and what the date is each day. For some reason, we don’t fight over the date like we do everything else. This is a huge, suspicious red flag.

4. Create a 15-step emotional rollercoaster for someone.

Jessica is feeling sad over a fight with her sister so she goes to meet up with a friend at a cafe. While walking towards the cafe, she bumps into an old flame. A feeling of intense anger hits, followed by frustration, lingering attraction, then annoyance at her feelings. Later that night, her thoughts turn to obsession, internet stalking, and total sleeplessness. She replays the conversation in her head with her ex a million times. She realizes she’s getting delusional. As she turns around in bed once more, her eyes rest on the quartz crystal on her desktop, given to her by her sister. She thinks about calling but it’s 4 am. She’s exhausted. She’s getting hungry. And deep down, she’s angry.

5. 7 Unique characteristics of both your male and female characters.

She was always taking walks in the rain. He had the perfect tan from working outside every day.

It was raining and blowing so hard her umbrella flipped inside out. At the same time, her hat blew off her head and landed on an open container of take-out food atop a pile of trash. A bum yelled out from behind a cardboard box next to the trash can, startling her into spilling coffee all over herself. She was late for her job interview.

7. 5 Of the most WTF things anyone has ever said to you.

Once someone told me “You’ve really got the rat by the ass.”  I was speechless.

The moment you finally realized what you were truly feeling. That time you were drunk until suddenly you were stone cold sober. That moment you caught a glimpse of her true character.

“I just wanted to let you know that I find you so, so attractive. My husband knows all about my infatuation with you.”

10. Write a few sentences about the 5 worst people you have ever known personally.

She rambled on and on constantly in a high-pitched voice. She was dating an odd young man who wore a black trenchcoat and a feather in his cap. He would visit her at work and they would make out in front of everyone.

Dream Dash Journal is a journal, art, lifestyle, and personal development blog. If you are a creative entrepreneur, you’ll enjoy the blogging & Etsy selling tips too! Please see the About Page to learn more.

This site utilizes affiliate links, meaning if you purchase a product via a link on this site, I may earn a small commission at no cost to you. All opinions remain my own. For more info, click here. Thanks for your support!